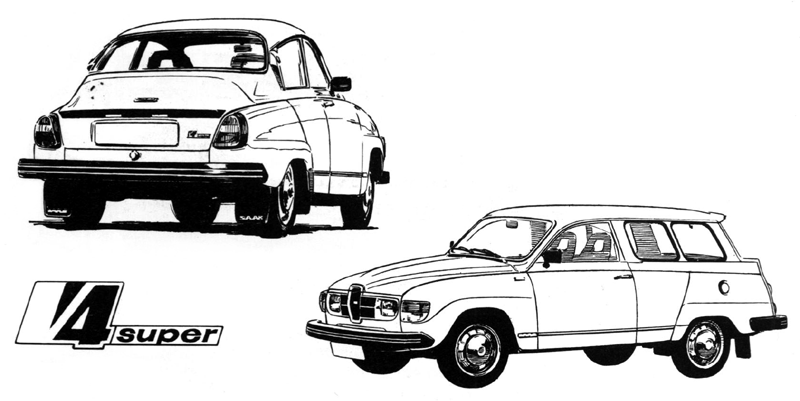 Among 1978 news for the 96 were redesigned tail lights with backup lights, and a small black spoiler at the lower edges of the trunk lid. At right of the license plate the "V4 super" badge denoted the 68 hp engine. The last 95 body was built on February 23, 1978. It was the 470th 95 for that year.

The 95 and 96 models started their 19th year of existence in the shape of "grand luxe" cars, with equipment, details, interior and utility that surely made them part of the GL class. There wasn't much that could be done - save a complete redesign from the ground up - to make them catch up to more modern vehicles with lower weight and more space. So they lived on in their very traditional shapes as long as tools and production costs would allow. The station wagon could be dismissed without serious effects on the marketing program, while the 96 lasted a bit longer. For its last year, however, the 95 offered such amenities as comfortable 99-seats, electrically heated rear window and, along with the 96, new front corner lights. When the last 95 left the factory, Saab had built a total of 110,527 station wagons.

While the older models were on their last legs, the 99 appeared younger than ever. The only thing remaining from the fall of 1968 was the shape of the two-door model shell. From bumper-to-bumper the 99 had been remolded, reshaped and re-equipped so that the car could stand up to many of its much younger competitors. And there was potential for more development.

The only problem was that what one wanted to do to it required some really drastic changes, such as extending the wheelbase and the front end.

The engine compartment was very crowded, especially in Turbo versions, and there were changes needed in the basic framework to allow more rational production, better interior space and to meet new American requirements for energy absorption and deformation in collision tests. For that reason Saab had been working for some time to develop a new longer car, based on the combi models.

Four-door 99 L - a simple and functional utility vehicle that was only available in Norway. 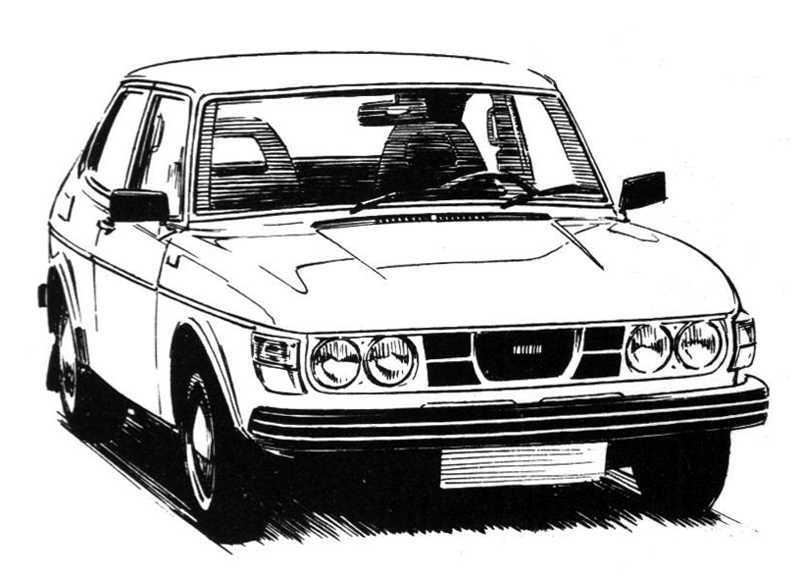 99 GL, in two-door version with USA equipment, was available with automatic transmission and Silver metallic paint. Combi models were also offered with an optional sunroof.

Three-door EMS was only sold in America, but some European countries instead got a GL "Special" with three-door body, alloy wheels, gas-filled shocks and 108 hp engine.

The top-of-the-line GLE appeared in 1978 as a five-door combi with redesigned interior. The gold insets in the alloy wheels were now black.

The new car was given the designation 900 and included three- and five-door models, designed to be produced parallel with the following year's 99s. The introduction took place in May 1978.

The work with the Turbo model and the Saab 900 absorbed so much capacity that there wasn't much time to make changes to the normal 99s for 1978. Still it isn't possible to list all the changes as it would entail too many notations about what applied here and what there. Most detail changes were on the inside (headliners, rear-view mirrors, sun visors, upholstery materials), the compliance of drive trains to different exhaust emissions regulations, and a number of technical and electrical components. What might be of particular interest would be the introduction of a sunroof option from GL and upwards on three- and five-door versions. (Earlier it was only possible to get sunroofs on cars built in Belgium, and then only on 99 two-door models for certain markets). The Turbo model had sunroof as standard equipment and, together with the EMS, also a new steering wheel.

The 1978 EMS was built in both two- and three-door versions. USA took both types, Australia only three-door, and other markets got the two-doors. Saab Turbo was launched as a separate model, although it was originally planned as a special EMS option. Both models were quite similar, but the Turbo had new wheels and different tires, a specially designed front air dam and a rear spoiler. GLE appeared as a five-door, with a new plush interior. A three-door "special" with a Super engine (twin carburetors), EMS wheels, metallic paint, front spoiler and tinted window was an addition to the GL series for some markets. 99L came in three models: two- and four-door sedans, and three-door combi.

During the 1978 calendar year 72,516 Saab cars were produced. Of these 642 came from Mechelen in Belgium, where production ended in May.