A plastic grill with new design was the most noticeable change on the 1974 Saab 95 and 96. Decor strips and headlight frames were painted silver grey and the stripes above the air intake black. More modern and longer lasting. 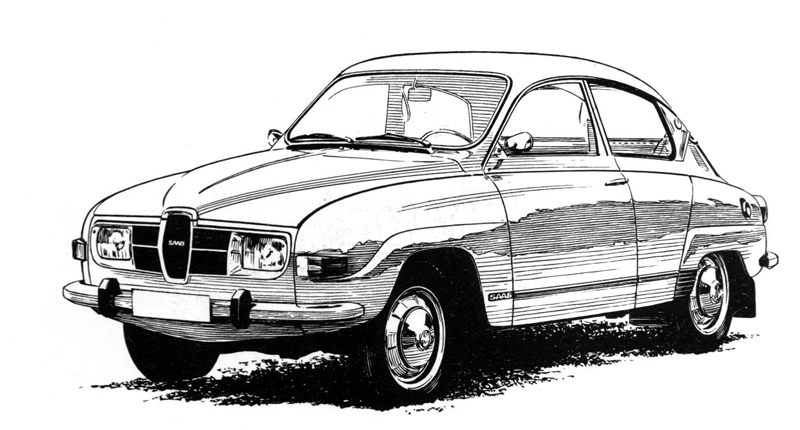 New front appearance for Saab 96 and 95 came with the 1974 models, as well as improved interiors and better corrosion protection. Technical news included larger windshield washer container and new radiator. Cars for Finland and Sweden came with retractable seat belts and a seat belt reminder light on the dash. Interiors were more elegant with new colors and patterns and heavier velour on the seats. The most important new item was extra thorough rust proofing, complemented with anti-corrosive oil sprayed into all exposed places and hollow areas.

Saab Sonett production ended late in the fall of 1974. By then the production total for models Sonett II, Sonett V4 and Sonett III had reached 10,236. The reason the model had to de discontinued was the expense necessary to make it meet all the new U.S. regulations for safety systems and emission controls.

Externally the 1974 Saab 99 models didn't offer much new, unless you noticed the new colors of that the bumpers had been moved further away from the body and were a bit stronger. The major changes were inside. Here are some of the most important: new seats in EMS and L models - safer and more comfortable and with integrated head restraints.

More elegant upholstery for the EMS, with a retractable center armrest in the back seat and door and side panels on energy absorbing polyurethane material. Reel belts in the front (in Sweden and some other markets). New steering wheel for L and EMS models. Power steering on some versions. New heating system and improved rear window defroster. Black windshield wipers, with a new wiper motor. Larger tires on all cars with 2-liter engines. Improved rust proofing. EMS had a new color, Sterling Silver metallic, instead of Copper Coral. By the end of 1973 a new 99 model made its appearance. It was called Combi Coupe - in USA, Wagonback - and fitted into the L-Series. 1974 production totals included 22,762 96-sedans and 5,559 95-wagons. Almost 22 percent of the 28,321 V4 models were built in Uusikaupunki in Finland, while 21,845 came from Trollhattan. Production figures for the 99 show that 15,646 were assembled in Finland; 41,124 in Sweden; and 5,867 in Belgium where an assembly plant went on line during 1973 in the city of Mechelen.

The Sonett III was built in 1,596 units in Arlov. Adding it all up shows a grand production total of 92,554 units during Saab's 25th year as a car maker. Export markets took 56 percent of the total. 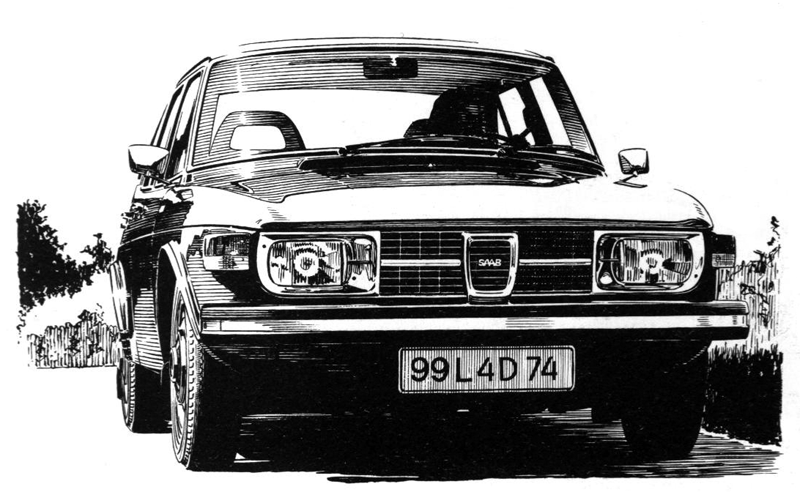 The 1974 Saab 99L was 2 inches longer than in 1973 - the bumpers had been moved further away from the body.
The EMS came in Sterling Silver metallic, and L-versions could also be had in Sepia Brown metallic. Otherwise the 99 used the same colors as the V4s.

The new Combi Coupe appeared on Swedish reads right after January 1, 1974. Same seating space and comfort as in the two-door sedan, but with only two people up front, the back seat could be folded down to open up a flat load area all of 1.84 m (6 feet) long. The Combi Coupe had a new grill design and the same interior and door and side panels as the EMS. 1974 was the last year for the Sonett.