In the spring of 1973 a "basic" 99 was introduced. It had an 88 hp engine, window frames without bright work and simpler wheels and bumpers than the other 99 models. Many emblems were new in 1973, for example the Saab logo on the rear: black with bright edges.

In the 1973 the Saab 99 line-up got a new addition. This reached downward in the price and equipment scale and consisted of only one model, a two-door sedan which initially went under the name X7. Standard models for 1972 were positioned in the middle of the scale and were called 99L. At the top was EMS.

The X7 could only be had with the 1.85 liter engine and manual transmission. The same engine was in the two-door in the L-series - unless the car, like all four-doors, had a 2.0 badge next to the L on the trunk lid, indicating the 2-liter engine. If the "L" was followed by a small "e" the car had electronic fuel injection and 110 horses; if it didn't it had a carburetor and 95 hp. Both 2-liter engines were combined with either manual or automatic transmissions. The 110 hp versions were primarily destined for export. Only the EMS offered the same engine on all markets.

Among other model year innovations were Halogen headlights with H4 bulbs on all models except X7 (US cars still had double, round sealed beam lights); impact beams in the doors of the 99; new hubcaps on all models; pivot mounted front springs and oil-filled steering gear on the 99; black grills on 99 X7 and 99L; extra trim strips in the EMS grill; headliner of molded fiberglass; easier-to-read instruments and improved sunvisors.

Saab fronts for 1973. All except 95 and 96 had black grill. USA models had round headlights, the others rectangular ones. Special badges and extra chrome strips on EMS. The 1973 Sonett III had the same impact absorbing bumpers as the 99. 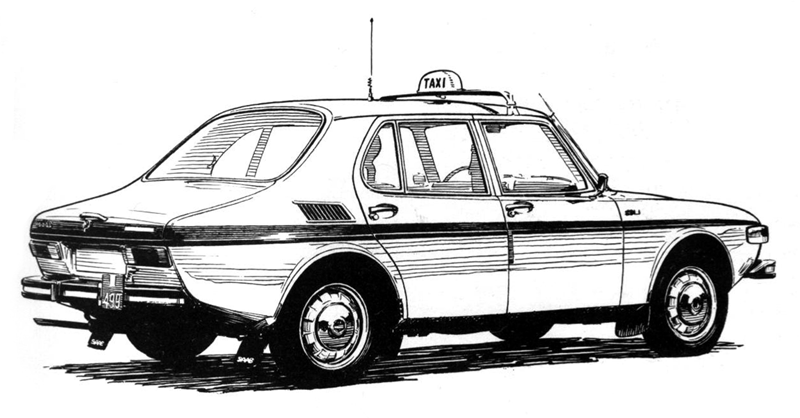 During the years Saab has built many specialized vehicles from police cars to taxis; from mail delivery vans to competition cars. Sometimes also a series of special cars for large government agencies. Here is a 1973 Saab 99 2.0 L automatic in taxi version.