This 95 can represent the 1970 Scandinavian V4 models, even though it could just as well be a 1969. Externally they were practically identical. Most of the news was found inside.

De Luxe versions had disappeared, but 96 models for sale outside Scandinavia retained the double Monte Carlo side moldings, back-up lights and opening rear side windows.

The new badge on the trunk lid arrived in 1969 in the wide letter logotype, above.

The news on the 1970 versions of the 95 and 96 was to be found on the inside. The entire instrument panel had been redesigned - with new more glare-free instruments, new cover, new controls, a fresh air ventilation grill under the center, and a grab handle for the front passenger. The steering wheel was also new. Upholstery on doors and the side panels was matched to the vinyl seat trim, and in Sweden rear shoulder belts were standard. And the 96, like the 99, was now also convertible for big loads, by means of a fold-down rear seat, which when down gave a flat load platform 1.5 m (59 in.) long. Less visible changes included automatic shut-off of the headlights when the ignition was turned off and a more durable exhaust system.

The number of model variations had been somewhat decreased. The last year for the two-cycle Saabs was 1968, and 1969 saw the end of the V4 De Luxe model, but 96 models for outside of Scandinavia were still a bit more luxurious in trim and equipment that cars for domestic consumption.

External changes for 1969 were limited to the removal of the chromed trim over the air inlet, and on the 96 a recessed fuel filler cap. The color program - the same as for the 99 - offered Savanna Beige as an addition, while the blue color had changed a bit from Hussar Blue to Middle Blue. 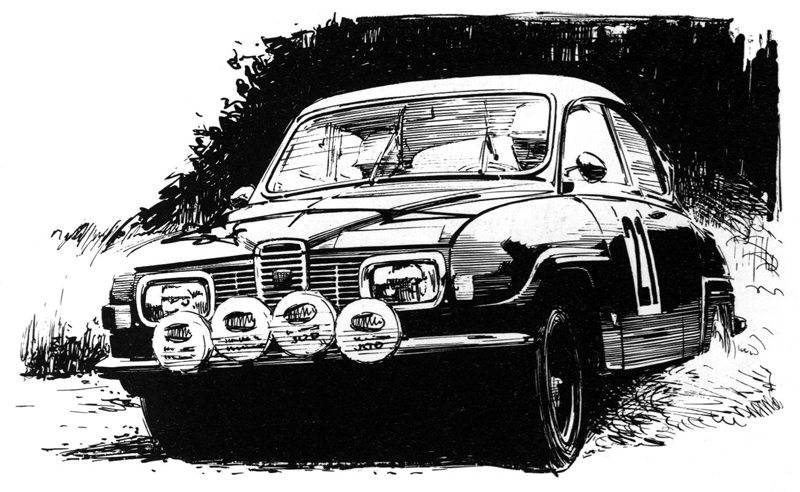 The Saab 96 was still, and would be for some years to come, a quite successful rally car. Stig Blomqvist, who joined the Saab factory team in 1970, placed second in the Swedish rally championship that year, and began the 1971 season by winning the Bergslags Rally, the Swedish KAK Rally, and the Finnish Winter Rally. The Norwegian Winter Rally was also won by Saabs, Per Eklund was first and Lennart Nystrom second. 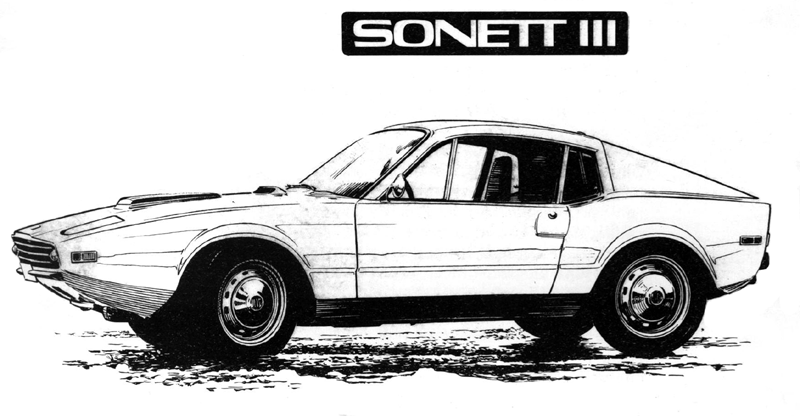 The design suggestions for the new Saab 97, Sonett III, came from Italian designer Sergio Coggiola. Many details, however, including much of the rear section were drawn by Swedish designers. The new model measured 390 cm (154 in.) in length; had a 215 cm (85 in.) wheelbase, and weighed 760 kg (1,675 lb.), empty. The quite large luggage compartment could be reached by raising the rear window.

New inner drive joints, new three-point motor mounting, and rear seat ashtrays were generally what the Saab 99 could offer for news in the fall of 1969. In the spring of 1970 Saab's first ever four-door car made its debut. The shape was the same as the two-door version, but the side treatment had been changed to accommodate the extra doors. Another 99 innovation that spring was the 87 hp engine coupled to an automatic transmission. In June 1970 the first Saab 99 in taxi version appeared.

With a weight-to-power ratio of 14 kg (31 lb.) per horsepower the 99 was not exactly a slow car, but the engine that had been developed in cooperation with English manufacturers could have been one size larger to give proper performance, or the necessary power reserves for an automatic transmission. A new engine variation with seven extra horses was developed through, among other things, the replacement of the carburetor with an electronically controlled fuel injection system. This led to the Saab 99E Automatic, with a Borg-Warner Automatic transmission and Bosch fuel injection. Production began in early 1970.

In February of the same year came another Saab first: Saab's first ever four-door body. Towards spring there were four different 99 models: Two and four door sedan; manual or automatic transmission.