The flag ship in the Saab line-up: a direct descendant of Saab Gran Turismo and Saab Sport. In the early part of the 1967 model year it was equipped with a 55 hp three-cylinder engine with separate lubrication and was called Monte Carlo 850. Later in the year it lost some of its chasm when given a more traditional powerplant, which even though it could get the speedometer needle a little higher on the scale, made little impression on die-hard Saab Sport enthusiasts. With the 65 hp four-cycle engine it was called Monte Carlo V4, and was only built during 1967.

The seats in the Monte Carlo were among the best seats ever used in a series production car, and instrumentation included clock, tachometer and trip meter.

With the 1967 Saab models, the sales curve started ascending again - markedly. What drove the wheels - and the sales - at new speeds was a brand new engine in both Saab 95 and Saab 96. It was an overhead valve, 65 hp V4, designed and manufactured by Ford. This new development, though, did not make the two-cycle disappear immediately. It was still possible to buy a brand new 95 or 96 with a three-cylinder two-stroke. In some parts of the world, such as in the U.S. there were even two models to choose from - one with the "Shrike" engine which required fuel mixed with oil and another with a separate lubrication engine. Both developed 42 hp; the 1966 Special version had been discontinued. The only model with the "bigger" 55 hp engine was the Sonett II. The Monte Carlo 850 was still listed in the catalogs, but since the standard V4 could beat it in performance it was hard to find buyers for it. In early 1967 it was replaced with the Monte Carlo V4. It wasn't just the engine range that was new for 1967. The list of changes and improvements in both 95 and 96 included alternator, stronger starter motor, higher capacity battery, three-point seat belts, and front disk brakes. The interiors had been improved with new materials and design for looks, comfort and safety. Cloth now covered the entire seating surfaces and energy absorbing padding had been installed around the side windows.

The 96 models for the Scandinavian markets looked somewhat simpler than those offered in America where all V4 models had the same trim as the Monte Carlo. But at the same time the U.S. version of the two-cycle 96 was simpler than its Swedish counterpart. It had drum brakes on all four wheels, generator rather than alternator, smaller battery and starter motor, windshield wipers with only one speed, all-vinyl upholstery and even a slimmed-down tool kit … A real price leader.

During 1967 45,325 Saab cars were manufactured, 455 of them Sonett II models from the ASJ plant in Arlov, just outside Malmo in southern Sweden. Total production of 95, 96 and Monte Carlo was 44,845, which means that someone lost count of 25 cars, if the total is to be correct. The missing 25 units were actually Saab 99 models which now had their own number designation. The 99 was presented to press and public in the end of November. 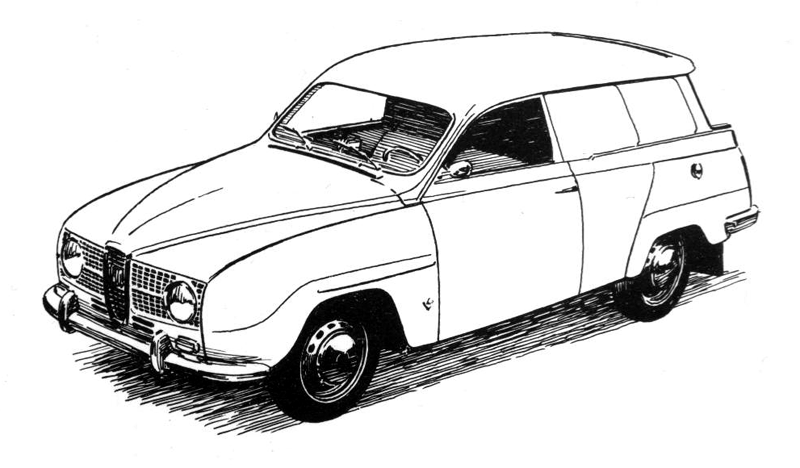 The Saab 95 delivery van - a special export version for a few markets - produced without rear seats and rear side windows. Here it is with V4 emblems.

After design and development work that had consumed some 40,000 engineering man-hours, the new Saab was ready for presentation. With that its code name "Gudmund" was replaced with the formal model designation Saab 99. The unveiling took place in Stockholm on November 22, 1967.

To drive a Saab Sonett was to drive a true sports car. Once you had succeeded in the contortions necessary to get into the car, and had settled down in the form-fitting seat, you sat very low and quite hard, but not uncomfortable. The suspension was stiff and the car was very steady in curves, even at high speeds. The driving position was inspiring and the leather covered wheel easy to handle. You could really straight-arm drive it. As long as the car had its two-cycle engine and was called Sonett II, it was a pretty good racing car. But competition became harder once it had its new V4 engine and had moved into the 1.5 liter class, without any greater increase in either power or speed. Both three- and four-cylinder Sonett needed about 12.5 seconds to go from 0 to 60 mph and both had a top speed of about 100 mph. Sonett II weighed in at 740 kg (1630 lb) with its 60 liter (16 gal.) fuel tank topped off, while the 10 horsepower stronger Sonett V4 was 35 kg (77 lb) heavier. The reason the car was modified for 1968 despite the 2-cycle's racing advantage was because it was never designed as a race car. The basic idea was to add to the Saab image, especially in America, and to broaden the model line-up for American Saab dealers. For American market conditions, the four-cycle engine was preferred. In the 1968 American Sonett brochure all of the car's finer points and safety details were outlined, along with performance data, and then the writer asked if this really wasn't more than enough performance. Interested Sonett prospects were told to visit their nearest Saab dealer and "ask for the Toy Department". Maybe not as serious as some may have felt it should be, but this was one way of declaring that this was a very special car that didn't have any pretences, other than begin a quick, small, sporty, and appealing every-day Saab.

Only 258 two-cycle Sonett3s were built. Then came Sonett V4 - not exactly a race car, but a tough, two-seater sports coupe with a fiberglass body and a solid rollbar behind the seats. The Sonett had a good chassis, but the body needed some modifications to eliminate some practical problems. Here is one of the design sketches that were developed within Saab for a possible 1970 model. Eventually the Sonett builders turned to an Italian designer for further suggestions.