The 1965 models were unveiled in August 1964. The changes were more extensive than usual. For a while there had even been thoughts of changing the model designations. The final decision, however, was to continue with old numbers even though the type drawing and some internal papers called the new cars 95.5 and 96.5.

Although there thus was no model 97 of the more regular Trollhattan cars, Saab 97 was still on the way, not as a real Saab project but in the shape of some externally created efforts to make a sports car based on Saab components. The first prototype was ready in February 1965 and had been produced by MFI - Malmo Aircraft Industry. The other came a month later, and was from ASJ, the Swedish Railroad Works. Both were brought to Trollhattan for examination and after a few weeks the MFI car was determined to be the one most suitable for further development. ASJ in Arlov in southern Sweden was assigned the task of making the necessary modifications and constructions that were needed for series production.

Ever since the 93 all Saab models had looked pretty much the same, at least from the front. After nine years there was finally a change. For 1965 the entire front, from the windshield forward, was altered. More space was needed under the hood for, among other items, a completely new cooling system. Besides that the 1965 models incorporated a hydraulically controlled clutch, a new fresh air ventilation system, suspended pedals and new outer drive joints. Engine output was raised to 40 hp for the standard model, and 55 hp for the Saab Sport, now called Saab Monte Carlo in the U.S. 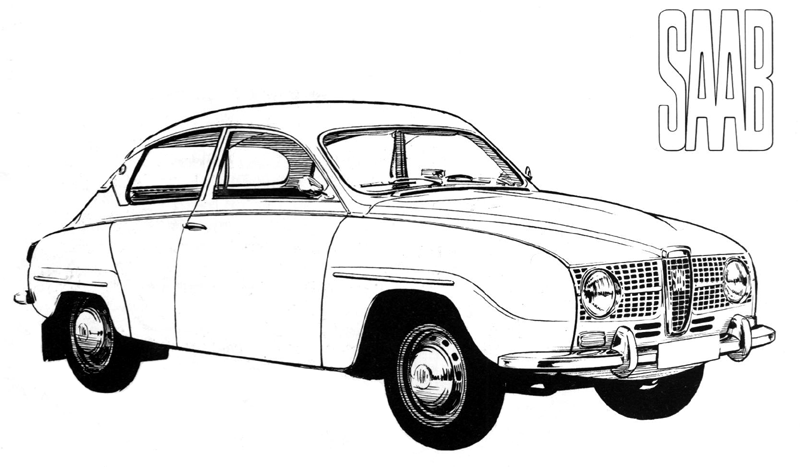 The 1965 Saab was somewhat longer than its predecessor. The entire front end was new and new bumpers were mounted both front and rear … except for the rear of the 95. Headlight bezels and the center grill were made of rustproof materials.

The first prototype for Saab 97, better known as Sonett II. It came from Malmo Flygindustri which had some experience with plastic manufacturing. But the body was made of steel! 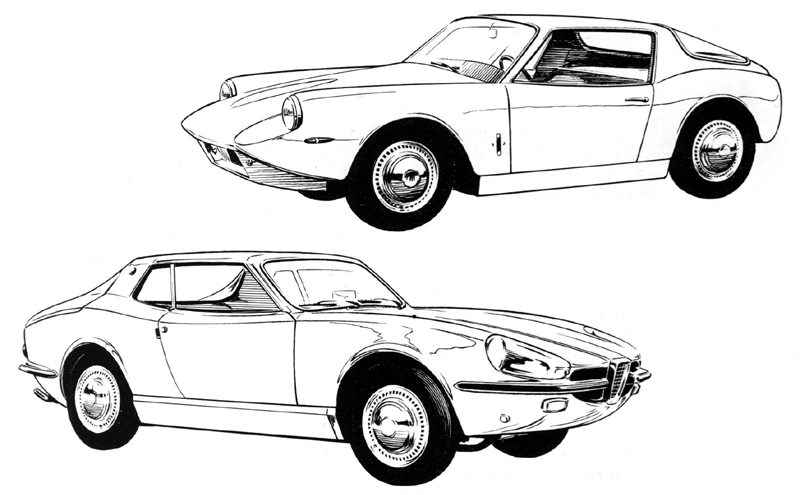 Immediately above: sports car prototype 2, 1965. More refined in its styling, but longer and not as aggressive looking. Sixten Sason designed it but felt constrained to use 96 components as much as possible (for example the windshield). Thus the car became a bit narrow, especially along its lower parts. The body was made of fiberglass and painted red. The rear window was recessed, and the concave trunk lid was designed to be able to hold an exposed load. The lid also included the rear window. Both Sonett models had the Saab Sport engine of 60 hp and were capable of 160 km/h.

Saab Sport was christened Monte Carlo 850 in USA. It had the same body as the 1965 Saab 96 and a 55 hp engine with triple carburetors. Saab Sport was driven by Olle Bromark in the Riihimaki Rally in Finland and by Pat Moss-Carlsson in the 1965 Monte Carlo Rally. Pat finished third overall and won another Coupe des Dames. Olle took the top spot in Finland.

The picture shows some of the facilities that have been added in Trollhattan since 1959. In the foreground is the paintshop (which since the drawing was made, has been further enlarged). At right are offices and behind them halls for final assembly. Press shops, etc., are further to the left, outside of the picture.

With the growing importance of the car business and other not directly aviation-related activities, the name of the corporation was changed from Svenska Aeroplan Aktiebolaget to Saab Aktiebolaget on May 19, 1965.

In Gothenburg the engine and transmission facility had been enlarged and automated. During 1965 almost three times as many engines were produced for each employee as in 1957.

A total of 48,517 units were produced in 1965, which meant that for the 16th consecutive year Saab could report a production increase over the previous year. Sales statistics for the Swedish home market, however, did not look that good. From a 1964 record of 28,894 sales, the curve dipped to 26,046 for 1965 and continued downward during the generally tough car sales year of 1966, a year that showed a total decrease in car sales in Sweden of some 67,000 units. A major drawback for Saab was that the company could only manufacture cars with two-cycle engines, and was now almost the only one making that kind of a powerplant. Total Saab production for 1966 stopped at 37,069 units, and included 7,243 Station Wagons, 29 766 Sedans (including Saab Sport versions) and 60 Saab Sonett II sports cars.

In Nykoping the Saab distributing subsidiary Saab-Ana built a new office complex, and during 1965 moved into a modern, well equipped spare parts facility. In combination with an older building the complex covers an entire city block. In the 1977, however, even this became too crowded and parts and accessory storage and distribution were moved to a new facility outside Nykoping. 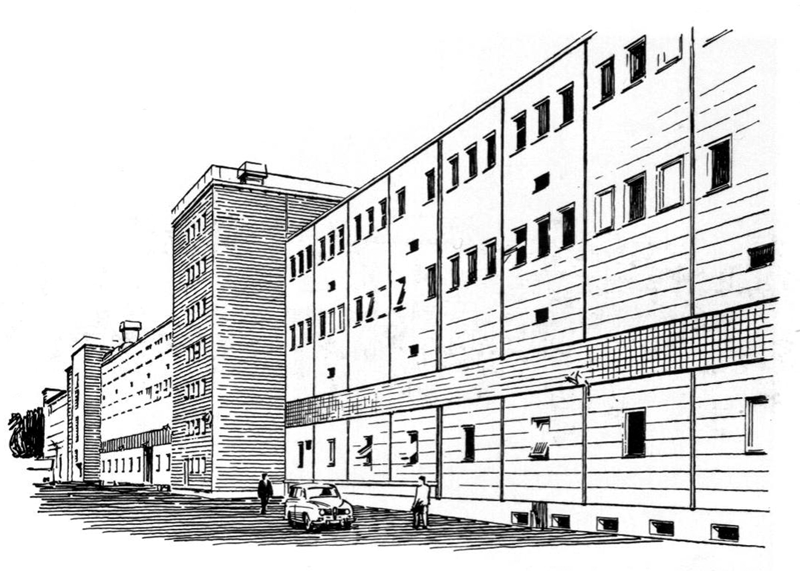 A view of the engine factory in Gothenburg, which in 1965 had an annual capacity of 60,000 engines, and employed 750 persons.

Below a rendering of the Nykoping facility, today primarily housing offices. The factory area, not visible in the picture, is used for preparation of special vehicles and also houses some parts manufacturing for the Saab cars.