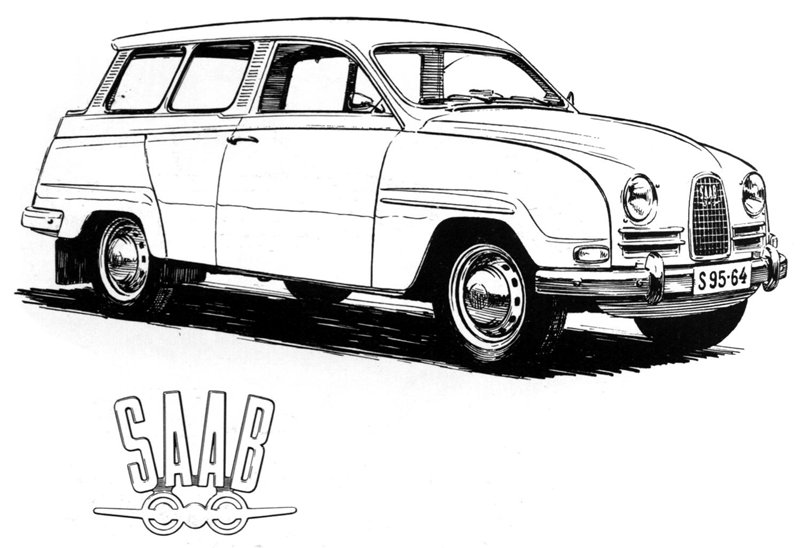 The Saab 95 station wagon represents the 1964 Saabs that were introduced in the fall of 1963. An outside indication of the model year was the new rear Saab badge, which appeared on all models except the Saab Sport, or Granturismo 850 as it was called in America.

An easy way to distinguish a 1964 Saab 95 or 96 from a '63 model was to see if there was a Saab badge at the rear. That was one of the new things on the '64, along with a redesigned instrument panel with round gauges; deeper color tones in the upholstery, and a handbrake lever easier to reach for a driver wearing his seat belt. Fastening points for three-point seat belts were also included, as were self-adjusting front brakes and a new windshield with safety impact zone. Saab Sport, in America called Granturismo 850, came equipped with a windshield of laminated glass.

Three-speed transmission was still standard equipment on the Saab 96 in the home market. For export versions, however, a four-speed variant had been offered for over a year. A new anti-theft feature was that the gearshift lever must be in reverse in order for the driver to remove the key.

In Sweden the price for the 95 was SKr 12,600, and for the three-speed 96 SKr 10,700. Two colors were new: Glacier Blue and Savanna Brown, replacing Arctic Blue and Green. Remaining in the color line up from the previous year were white, red, dark blue and grey.

The most talked about innovation for 1964 was a safety detail that in those days was extremely rare: a dual braking system with two independent circuits. The Saab construction was unique in that the two circuits were diagonally connected, so that one worked on the left front and right rear wheels, and the other on the right front and left rear wheels. If one braking circuit should fail there is still braking power for two wheels, one front and the opposite rear. The car can be steered straight and the risk for a skid is relatively slight. (The same dual diagonal principle is still used on the 1984 Saabs.) 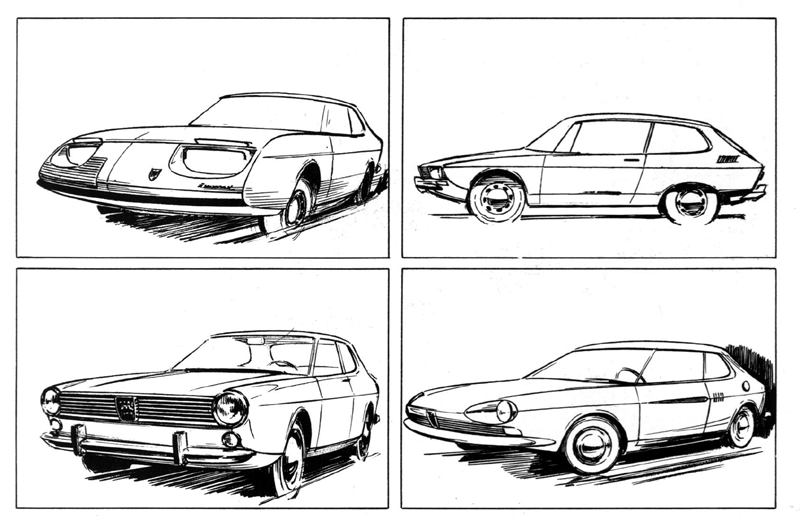 The pictures above render in translation to inclines, some 1964 pencil sketches from the Sixten Sason design shop.

Saab was into its 15th year as a car maker and with an annual production of about 45,000 units had far surpassed original targets. The Saab make was there to stay, and was solidly established on a number of markets. But competition had got tougher and the demands from the buyers were ever increasing. Since it really wasn't possible to further develop and redesign the already existing models, and since it wasn't possible to make them in the different sizes, Saab decided to start work on a totally new car. A car that could appeal to an even wider audience, and remain modern for a long time to come.

The decision to begin Project "Gudmund" - what eventually was to become Saab 99 - was made on Gudmund's day in the Swedish almanac, April 2, 1965. Just about 20 years after the first drawings and sketches for the first Saab car were begun.

The final shape of the new car had not yet been determined, but certain major lines were defined. Even more definitive was the small wooden model that already in April 1964 was tested for its aerodynamics.