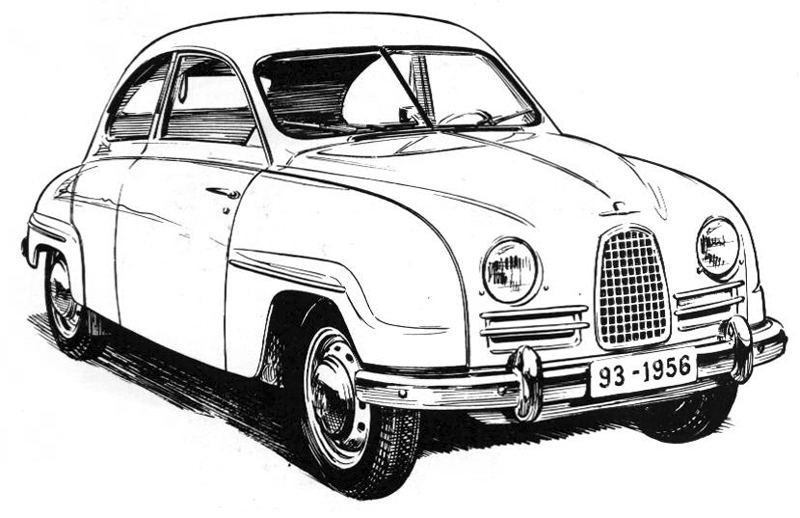 Any immediate production increases as soon as the Gothenburg plant went on the stream January 1, 1954, were not possible. But during the time it took to get operations to run smoothly at, and between, the two plant locations, production could still be increased to a pace of about 6,000 units per year, by the time the successor to the 92, Saab 93, was introduced December 1, 1955.

Manufacturing of components for the new model had begun in September, but time did not allow for more than 457 finished 93s to be built before the end of the year. The end of the 92 B came after 680 units had been assembled in 1956. The differences between the new and the old model were considerable. Instead of the transverse two-cylinder engine, the Saab 93 had a longitudinally mounted three-cylinder engine, mounted in line with a completely new transmission. The output, according to DIN standards was all of 33 hp, even though the displacement of 748 cc was slightly smaller than that of the 92. The cooling system included a fan, a thermostat and a circulation pump. A 12-volt electrical system was introduced, as well as tubeless tires, improved brakes, lockable free-wheeling, improved heating and ventilation, redesigned steering mechanism and new colors. Among major innovations were the coil springs, replacing the previous torsion springs, and radically changed rear axle and front end design. Wheelbase had been increased to 2488 mm (97.95 in.) and track to 1220 mm (48.03 in.). The instrumentation was improved to include a warning light to show when the fuel level in the new tank - now placed between the rear wheels - was down to 7 liters.

Here's a representative 1957 Saab. The original for the sketch is an American photo. Saab had just started a subsidiary in the U.S. -- Saab Motors, Inc. -- and the first boat load of 250 Saab arrived in America in December of 1956. A much reported victory in The Great American Mountain Rally in 1956 helped greatly in creating interest and sales. Some 1400 cars were sold during the first full year.

The 1958 model was called Saab 93 B and featured a curved one-piece windshield as its major one Innovation. It also had blinkers instead of the old fold-out direction indicators, adjustable rear seat height and fixtures for seat belts.

The car's outside appearance was changed by Sixten Sason, with redesigned grill, hood, front fenders, and bumpers.

Saab 93 was produced without major changes until the fall of 1957, but the wiring harness was changed and improved already after 5,000 units had been built, and an automatic clutch - Saxomat - was offered as an option in April of 1957. Major successes in international rallies created new interest outside of Sweden for the small Swedish car, and gave proof of both its durability and its fine roadholding. One example was the 13-day long Tour d'Europe in 1956, in which 65 cars started but only 11 finished. The first car over the finish line, and the only one to have completed the 8,000 mile (13,000 kilometer) drive through 13 countries without time penalties was the only Saab in the event, driven by Rolf Mellde and Sverker Benson.

Another victory was recorded at Saab's competition debut in America, in the tough Great American Mountain Rallye in the fall of 1956. Saab entered three cars and won overall, class and team trophies.

As early as 1953, Saab management had started exploring the possibility of selling cars in the United States, but decided to wait awhile. In 1956, however, the market looked more promising. The new model, the competition successes and increased production capacity all helped to make the American market look more interesting. With the Saab purchasing office in New York as a base, an organization was established for the sales of Saab cars. Saab Motors Inc., was formed as a Saab subsidiary, and a depot was established near Boston to receive cars and spare parts. (Today the company is called Saab-Scania of America, Inc., and has a number of depots spread over the U.S. The main office is in Orange, Connecticut.) During its first full year of operation, 1957, Saab Motors sold, 1,410 Saab 93 cars in the U.S. - about 14 percent of Trollhättan's total production. By the end of 1959 close to 12,000 Saab cars had been shipped to America.

Some major investments to increase production capacity in Trollhättan were made during the late 1950s. The first goal of 10,000 cars per year was reached in 1957, when more than 50 percent more cars were built than during the previous year. But plans called for the expansion to proceed further. 1958 production hit the 14.000 mark and the final figure for 1959 was 17,836.

In 1954 and 1956 Stockholm, Sweden, hosted major automobile shows. During the later of these, Saab was responsible for one of the major drawing cards: a low and racy sports car called Sonett. The car was developed as an experiment - and as a possible race car - and its fiberglass body hid a 93 engine tuned to develop 57 horsepower. In order to run as it should, though, the engine had to be revved high and kept as cool as possible. The Sonett was not for streets or highways, it required race courses and experienced drivers. It had a top speed well over 210 km/h (with four-speed gear box and hard-top) and it could very well have become a contender in the GT class, if the competition rules hadn't been changed for the 1958 racing season.

The Sonett was built in six complete units. Five of these are still around, and of those one white and one blue are in Saab's museum in Trollhättan.

In the fall of 1957 the 1958 Saab was introduced. Called 93B, it showed the following major changes: curved, one-piece windshield with improved wipers; adjustable rear seat; blinkers instead of direction indicating arms; self-mixing fuel tank; leaner oil mixture in the fuel; fixtures for seat belts; theft protection in the form of an armed cable between ignition lock and coil; more secure door locks; and improved electrical system. 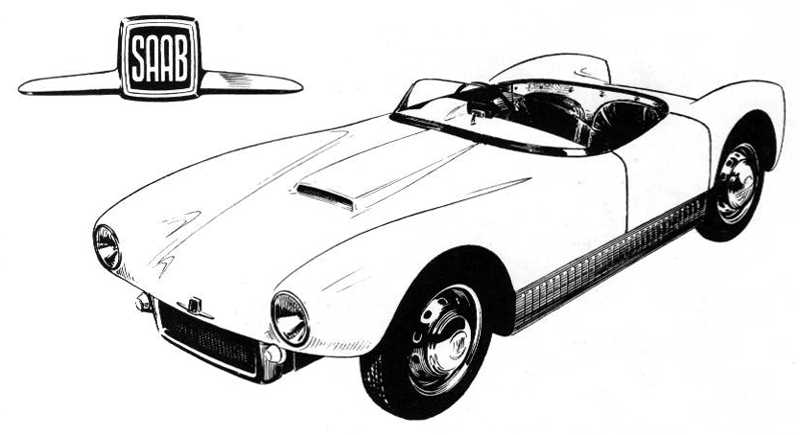 Saab Sonett - unofficially Saab 94 - was built in only half a dozen units, all for experimental or competition use. The Sason-designed body was made of fiberglass reinforced plastic and was both low and light. The car weighed no more than 500 kg (1,000 pounds). It was 3.5 meters long and 825 mm high. It could make the standing kilometer run in 34 seconds. The main chassis parts were made of light alloy, while most mechanical components, although sometimes modified, came from the 93. The engine developed 57 hp.

The Saab 93B, below, was a very popular model. It was quick, easy to handle and well equipped. Innovations for this model included windshield washers, asymmetric headlights, more comfortable seats, larger front brakes, outside rear view mirror on the right hand side, and a new rear badge.

The Granturismo 750 had the same body shell as the 93, but special trim and equipment. Looked best in red or black. The model came out in the spring of 1958. In its first two years it had the three-speed transmission, but after that it got the 96 body and four speeds. With twin carburetors it was quite a performer. 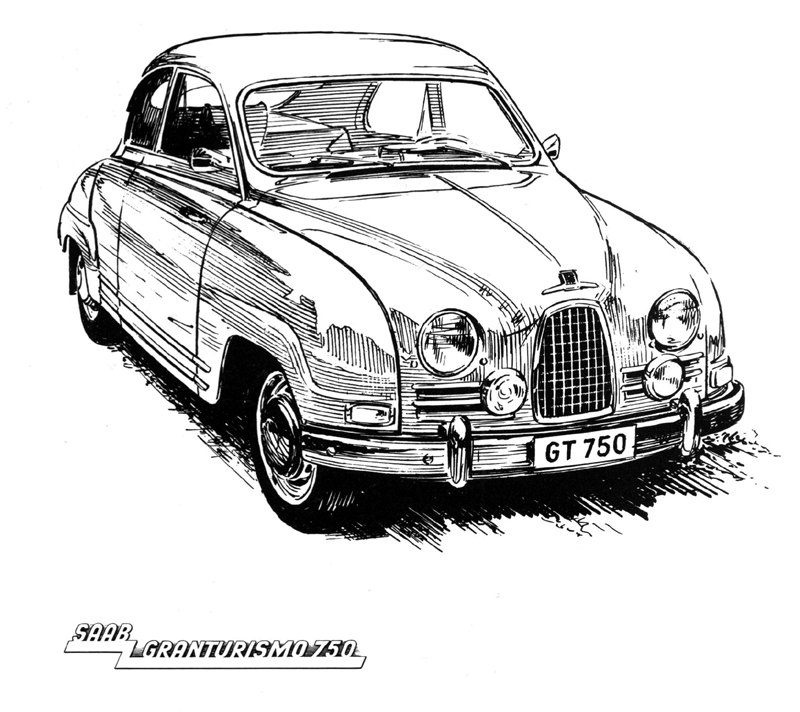 When the Sonett no longer could be the Saab competition flagship, tuned and stripped 93 models took over for Group III rallying among the sport's pros. By not adding too much power, but a more luxurious and sportly interior, a new Saab model was created. Christened Granturismo 750, it was presented to the American public at the New York Auto Show in 1958. It was aimed at car buyers who wanted more performance than the standard 93 could offer. The rear seat was hard and narrow, but the front seat made up for it in both looks, comfort and support for the active driver. Sports steering wheel, tachometer, speed pilot, extra lights, and sports car tires were included in the equipment. And under the back arm rests were special holders for smaller items, or food and drink containers.

The engine had the same displacement as the standard 93, 748 cc, but higher compression ratio and 12 more horsepower. With the aid of a special tuning kit, the GT owner could easily convert the car to a GT 750 Super, a car not too suitable for public roads but a real performer on rally roads and race tracks.

Saab 95 made its debut in 1959 and was slightly altered in stages during its first years. Here is the prototype with rear-hinged doors, and chromed trim on the rear roof supports. In the beginning the 95 was assembled in Linköping. The 93 was
about to be phased out, but since its successor was not yet ready, an interim model, 93 F was introduced. The major new feature: front-hinged doors. 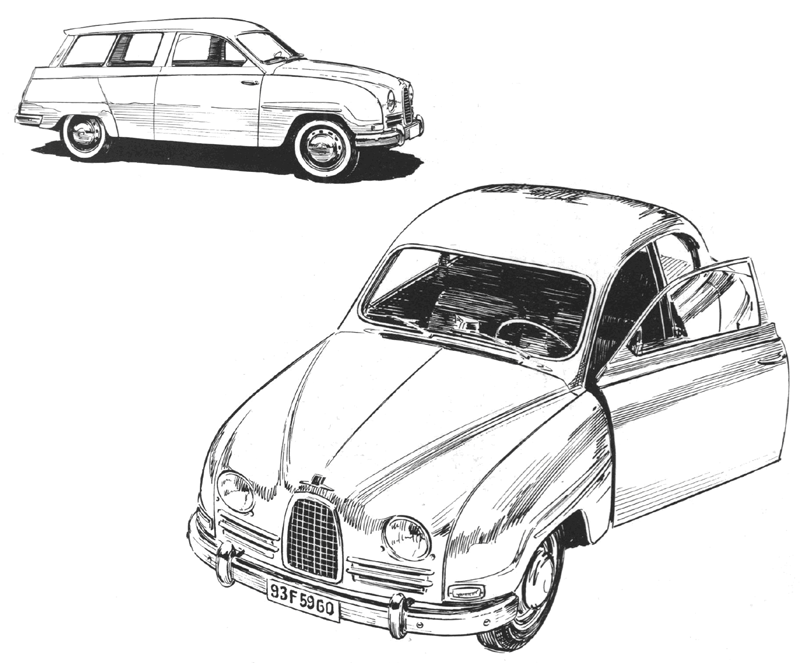 After 10 years as a car maker Saab widened its model range with a station wagon. It was first shown in May of 1959, with production start late in the fall. The model designation was Saab 95. It was first assembled in Linköping, and was somewhat of a mongrel as far as powertrain and body parts were concerned. Side doors and dashboard came from the 93 B, but engine from the still to be introduced Saab 96. The gearbox was Saab's first with four forward speeds, if one excludes a few specially made transmissions. Behind the fold-down rear seat was an extra seat, where two persons could ride - facing backwards. The car was thus a seven-seater, or a five-seater, or a two-seater ... all depending upon use. The long - 160 cm - flat load platform could carry half a ton, provided there were no passengers.

The 1960 model of the standard Saab passenger car was called 93 F. The letter F stands for front-hinged doors (these also came on the GT 750 but only later on the 95 model). Mud guards at the rear wheels and a cooling system with larger capacity where among the innovations on this, the last of the Saab 93 line.