Plans for car production in Trollhättan started evolving within Saab management as World War II was nearing its end and management sought to widen the production program to meet the expected decline in military aircraft requirements. For many reasons, automobiles appeared to be a suitable replacement. Motor vehicles were somewhat akin to the products then being made and were also suitable for the tools already in use. Provided that the automobile - no one dared to think of more than one model and type of car - was in the right size, type, construction and price, it should be quite easy to sell. That the Company's resources were such that one couldn't afford to design more than one relatively small and simple vehicle did not seem to have any influence on management's optimistic outlook. The success of small European cars on the Swedish market just prior to the outbreak of the war gave everyone full confidence that cars of the same type would also prove popular in the future, and that demand would be enough also to encompass a car from Saab. Export sales of any volume were not considered.

The decision to actually design the automobile project was made in the fall of 1945. Development work was initially conducted in Linköping and was directed by the very capable engineer Gunnar Ljungström, who to assist him had a staff of only about 20 people. Since Saab had no experience in car construction, not any traditions in this field, it became a matter of common sense and the ability of those involved to think and design technically, analytically and innovatively. But, if one could design and manufacture advanced aircraft, why not cars?

Ideas and designs flooded in and by summer 1946 the first prototype body was ready, hand beaten on a wooden jig, black, shiny and very streamlined. It was equipped with a borrowed 18 horsepower engine, springs, wheels and all those things that made it into a real automobile - the original Saab 92001, that was eventually to be driven many long miles and give much valuable experience. But the shape was neither pretty nor very practical. New blood was needed. In the design-artist Sixten Sason - at that time working with Saab on aircraft X-ray and instruction drawings - Ljungström found the right man for the job. Sixten sketched and thought, and finally hit on the right shape. It is the one that is discernible in the sketches above, which in simplified form show the basic design that was reached after about one year of prototype design work. The wooden model was altered, metal was shaped around it, and in May of 1947 another prototype, in almost finished shape, stood ready: Number 92002. 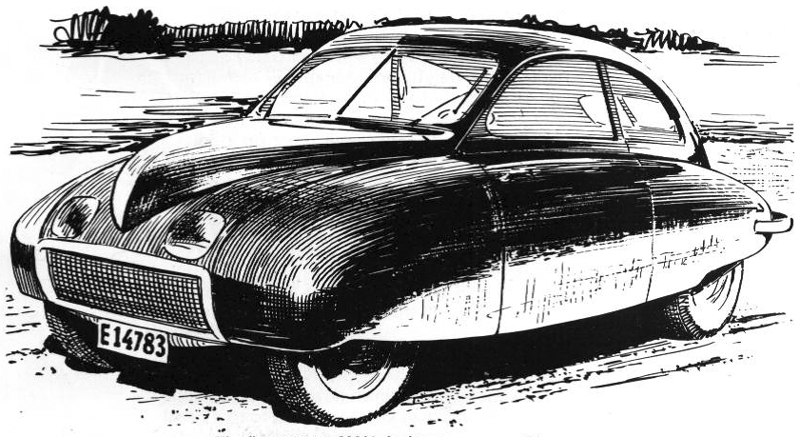 The first test car, 92001, had too thick doors and was quite impractical. Sason found a new theme, 92002, which was converted to a full scale wooden mock-up to serve as a master for the creation of actual manufacturing tools. Once painted, number 2 was placed on blocks to be compared with its predecessor. Number 1 was a bolder design, but number 2 was more sensible and, it was felt, more to the taste of the car buying public.

With his suggestion for 92002, Sason presented a design that in its basic from was to characterize Saab cars for thirty years.

Actual construction work began in the later part of 1946, and at the same time special tools were bought or manufactured for series production. And discussions began with a large and well-known company about the distribution rights for the Saab cars.

Before the entire car activity was moved to Trollhättan, in the fall of 1947, three test cars had been completed.

Outside they all looked practically alike, but beneath the skin there were wide differences. Everything had to be tried and tested. Altogether these first "real" Saab cars were driven close to 200,000 miles.

The Saab automobile project was announced at a press showing in Linköping on June 10, 1947. With that the shroud of secrecy was lifted. The first of the 92002 prototypes had just been completed and was unveiled in front of the press. The journalists were told that the car had front-wheel-drive and "superior" roadholding characteristics. Streamlining helped keep down the need for engine power and kept fuel consumption low. Top speed was indicated at just over 60 mph. Power came from a two-cylinder, two-cycle engine, transversely mounted in front, and developing about 25 hp. The car was to be called Saab 92, and series production would begin in about two years. Sales in Sweden, according to a just reached agreement would be handled by Philipsons Automobil AB. 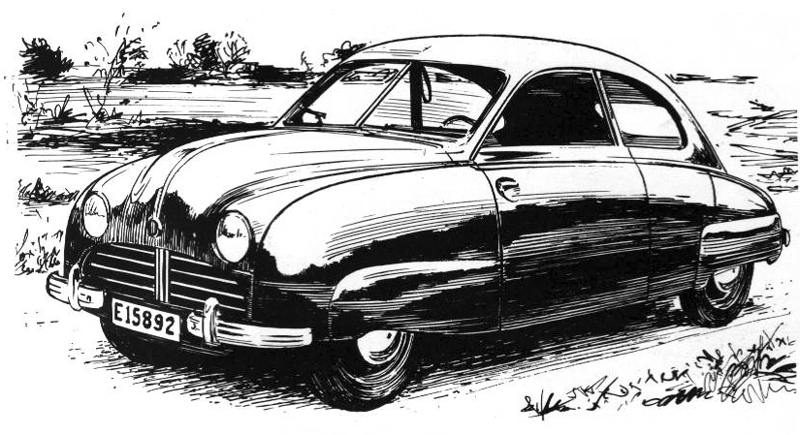 This is how the first 1947 Saab looked when new. It was still far from ready for series production and was altered as design work and testing continued. This was the car that was shown when the Saab car project was made public 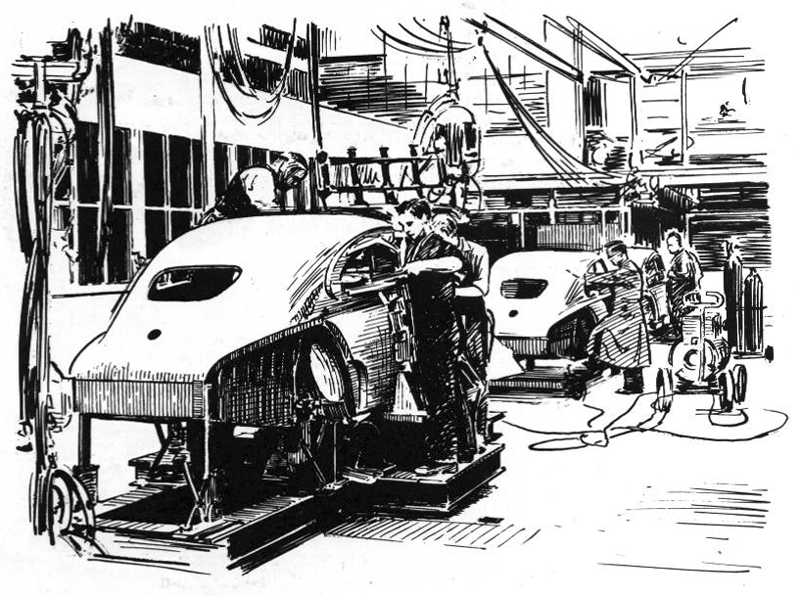 Philipsons showed their belief and trust in the new car when they ordered 8,000 units of what was described as a "four-wheeled covered vehicle of Saab's Type 92", and paid a handsome advance, helping the financing of the entire project. During production preparations Saab was also able to take advantage of the ideas and wishes of the future distributor, especially as regards detailed equipment items. This is how a special, economy version was deleted, and how it was decided that all cars were to be of "de Luxe type".

It can also be noted that Philipsons needed a car in Saab's size and price class, and actually had plans for their own production of something called "Phillipin". This model had reached the wooden mock-up stage by the time it was abandoned in favour of the Saab.

The Swedish press devoted considerable space to the new Swedish car immediately following its unveiling. And public interest was great. The list of prospects grew rapidly. Inquires came from both near and far, from both private persons, and companies and institutions. Some tried to bypass the waiting lists, while others wanted to represent the new car make.

Two years passed: two interesting but trouble-filled years that saw designs mature and the production machinery become more and more complete. But not at the speed that had been calculated from the beginning. By early summer 1949, a first test run of 20 units finally could be produced, using a considerable number of the series production tools. Actual series production began in the middle of December 1949.

The Trollhättan facility in 1950, above. The air traffic control tower and the wind sock hint of the aircraft connection.

Shop space available for car production in the Trollhättan factory measured some 190,000 square feet (17,700 sq. meters) and housed press shop and body assembly, engine and transmission construction, upholstery and paint shops, and final assembly and final adjustment. Of course, the assembly pace was rather slow. At first three, then four cars per day rolled out. But Saab had not aimed for fast growth or to become an immediate auto industry giant. At the end of the first year 1,246 cars had been built, all practically identical, and all green.

It is remarkable how many of the car's original parts were actually made in Saab's own shops, or purchased as semi-finished products from Swedish suppliers. Imported parts and materials accounted for only about 17 percent of the total value of a Saab 92. 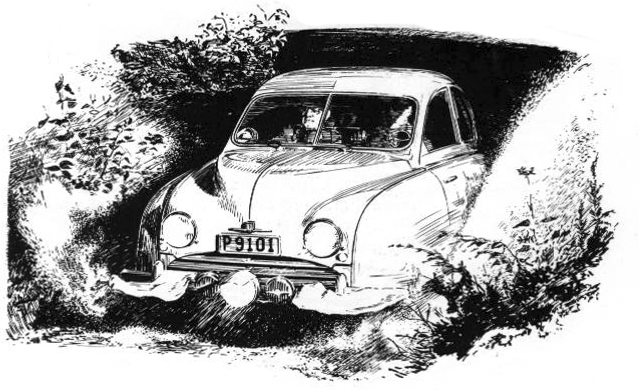 This could have been a regular test drive of a new Saab 92 about 1950. Actually it’s the Swedish champion in endurance rallying in 1953. Driver: Rolf Mellde.